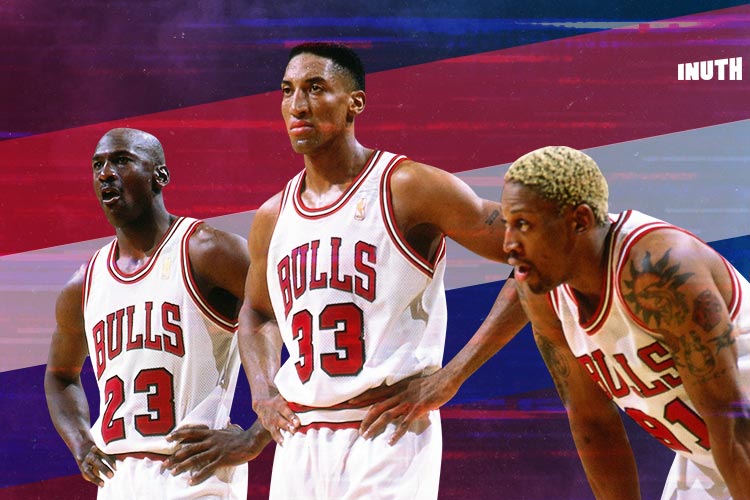 During the ESPN documentary, The Last Dance, Chicago Bulls head coach (1990-1998) Phil Jackson distills the tragedy of being ‘successful’ in sport. He says something to the effect of how winning is a moment, and once that moment passes you’ve got to do it all over again. Sportspersons can’t rest on their laurels, there’s always someone better/younger/calmer out there. Accomplishing something once isn’t enough, you’ve got to be able to do it again. A philosophy subscribed by none more so than Michael Jordan, who wanted to win at all costs. It didn’t matter if it was a basketball game, golf, a deck of cards or even a petty bet in the players dressing room. “Michael wanted everyone to owe him, he wanted everyone’s money in his pocket” a team-mate is heard saying in the docu-series.

The Last Dance, coined by Jackson, describes the 5-time champions Chicago Bulls’ final opportunity to defend their title in the ’97-’98 season, before the management acts on its plans to rebuild. Jackson has been told it will be his last season as the head coach of the Chicago Bulls, Jordan has publicly stated he will retire if Jackson doesn’t come back as coach. One of the most vital cogs in the Chicago Bulls machinery, Scottie Pippen, is sitting out because of a bitter episode with the team’s management regarding low remuneration. Things aren’t particularly ideal when Jordan’s Chicago Bulls begin their so called ‘Last Dance’ in the NBA in 1997-98, but there’s a lot to uncover about this champion team, and that’s something the documentary does by expertly cutting between the past and present predicaments.

A Star Is Born
Thirty two seconds are left on the clock during a University of North Carolina (UNC) vs Georgetown game in 1982, when a young man makes one of the cleanest shots possible on a basketball court. The ball drops in without even kissing the rims of the net. What a pure sight! The 3-pointer proves to be decisive for the National college division championships. The 18-year-old skinny boy from Wilmington (North Carolina) is Michael Jordan. Turning pro in his junior (third) year of college, Jordan is already being hailed as a future champion, when he’s drafted for the Chicago Bulls. Can a young man rebuild an entire franchise’s culture by himself though?

“One man can’t lead a team to a championship”, many rival coaches say about Jordan and the Chicago Bulls. They’re right. Jordan has caught the eye of the world, but he can’t bring the Bulls any closer to the playoffs. Enter General Manager, Jerry Krause. He signs up Scottie Pippen and Horace Grant for the team. Jordan’s trusted aide, Charles Oakley, is traded to the New York Knicks for Bill Cartwright. These players become the foundation for the “Champion Inc” being put together in the Bulls camp.

Pippen becomes Jordan’s trusted lieutenant. Grant is third in the hierarchy for scoring and facilitating rebounds. Assistant Phil Jackson takes the place of head coach Doug Collins. Michael Jordan has now earned the nickname ‘Air’ “You need to catch him while he’s on the ground, because once he’s up in the air… he’s not human anymore” – a rival manager is heard saying. Chicago has a great team, but they can’t seem to win the big moments. The team doesn’t have Jordan’s unrelenting will to succeed. Not yet, at least.

A Tyrant? A Bully? A Mentor?
After a disappointing 1989-90 season, where the Bulls lose to the Detroit Pistons for a second time in a row, the entire team is in the gym during the off season. Jordan is tired of being pushed around, so he’s pumping some iron to build muscles for the first time in his career. Especially against the Detroit Pistons. One of the most famous basketball players on the planet by now, Jordan’s off-court celebrity is spilling into the way he runs practice on court. Team-mates call him a dictator, a tyrant, a bully… who berates them for the smallest mistakes. It was the fear of having to face Jordan, that drove a lot of them to play almost flawlessly. The on-court villainy comes out in the form of a book, Jordan Rules. A similar dictatorial style adopted by Imran Khan, would result in Pakistan winning their only cricket world cup in 1992. 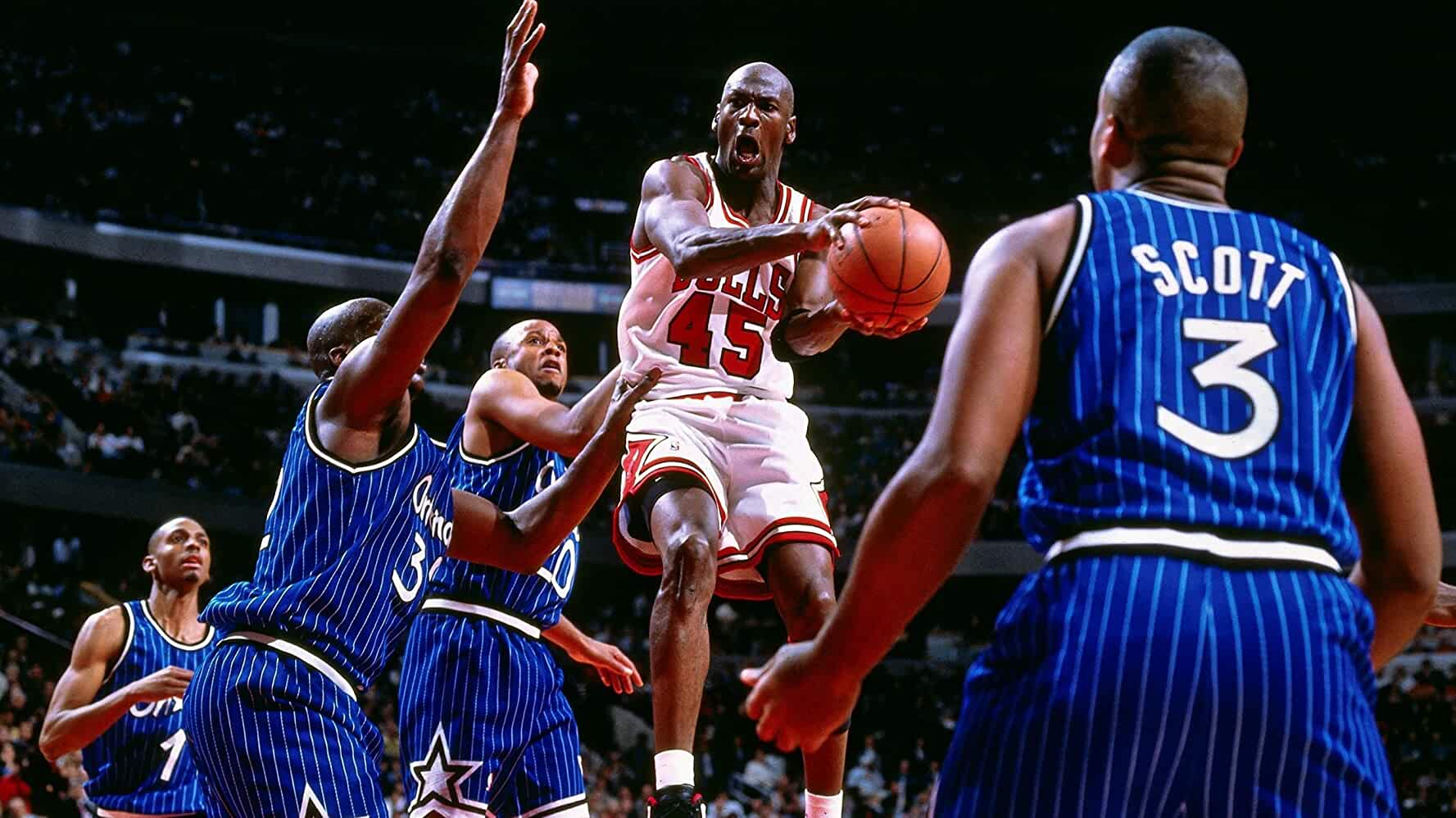 Coach Phil Jackson’s strategies have democratised the ball-possession, unlike earlier strategies that required the ball to be passed to Jordan who would hopefully make the shot. Jackson insists that even though Jordan remains the centre-piece of the Bulls’ puzzle, he needs to keep his faith in everyone to make the winning shot. With a perfectionist like Jordan, this ‘trust’ came at a high price. And hence, that pre-season practice in 1990 remains the turning point for the team.

What’s touching to see is how Jordan breakdown with his first NBA trophy in the players’ dressing room, alongside his father. In a room where there’s raining champagne, Jordan repeatedly says “7 years… 7 years…” while hugging the trophy. It’s taken a long time, but he’s finally made his mark on history.

Living On Everest
Jordan is now the greatest basketball player on the planet, but how does one keep the fire burning through a 13-year career? How does one remain motivated through nearly each of their 1251 appearances, while averaging 30 points per game. Once the hurdles began to run out, Jordan started inventing his own. A ‘Good game, Mike!’ pat on his back from a rival after a mediocre game, fuels Jordan towards ‘revenge’ in the next game. Something he later reveals as a product of his imagination.

No sign of ‘disrespect’ is too small – Jordan’s super-sensitive ego seems to be egging him onto greater heights. A rival not saying ‘hello’ during practice, a pundit predicting a loss in an upcoming game, or the usual trash-talk during a game of golf or cards. Once Jordan has your number, he is going to enter the court with the singular motivation to destroy you. Not merely defeat, that just isn’t Jordan’s way of settling scores. He will dedicate all his living faculties to make a point.

It’s an interesting portrait of a man, who could never switch ‘off’ at the highest level of the game. An ego-maniac, who would let nothing slide. Working tirelessly to preserve his demi-God status. Playing through a case of food poisoning, playing a few days after his father has been found murdered. Showing up on court through personal tragedies, through days when life is ‘comfortable’. Ensuring his team always wins, so his legend becomes more enduring. What does it do to a man, psychologically? 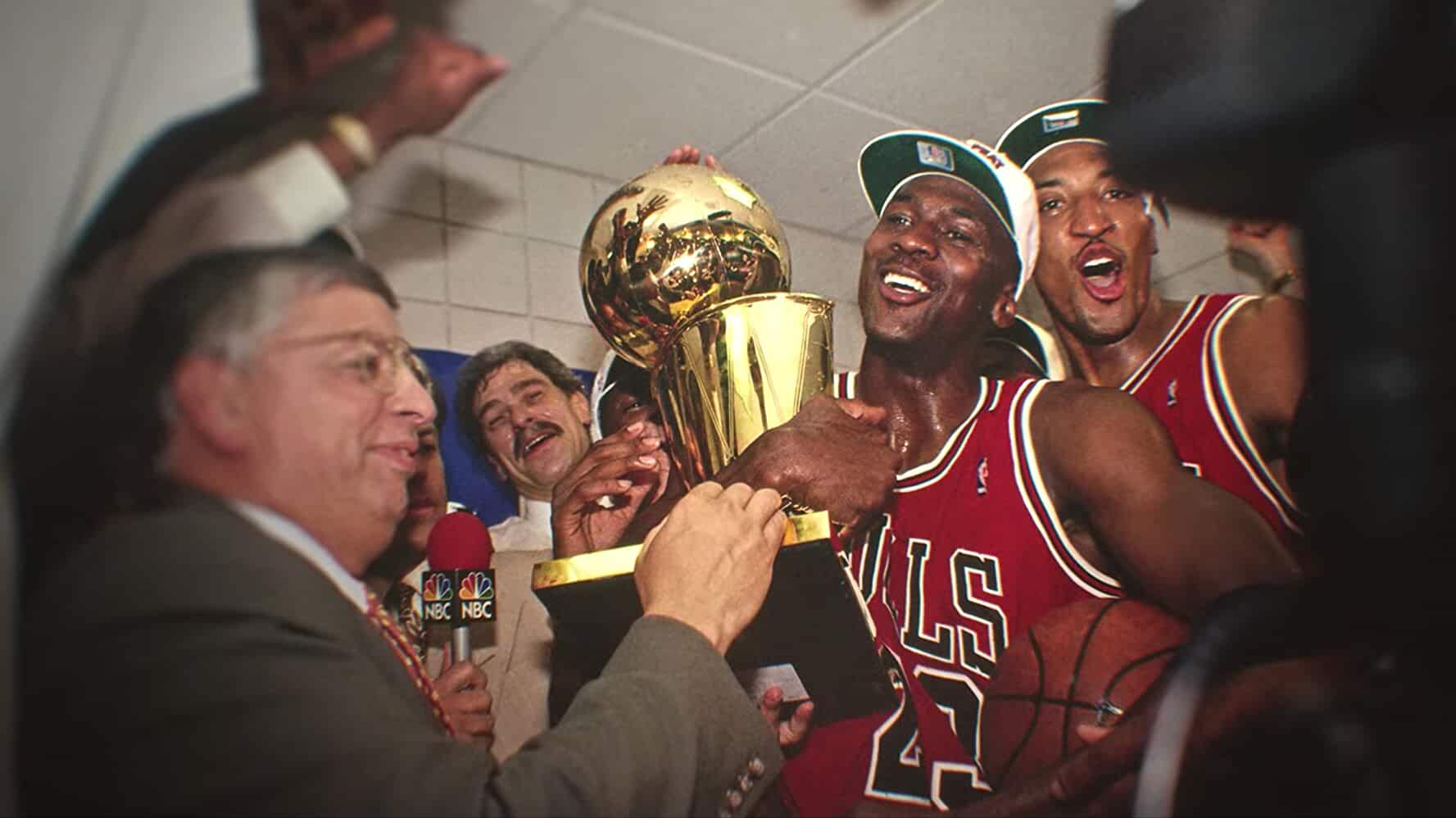 And in spite of all these overwhelming emotions, how does one keep their mind blank while taking a shot in the dying seconds of a match that will arguably decide the championship? If champions insist on a fire and ice combination for the most critical moments of their sporting careers, Jordan was probably an active volcano throughout. Many former rivals have recounted how they saw him exhausted on court, after which he suddenly found ‘a switch’ within and took things to mythic levels.

Navigating Celebrity
“He (Jordan) never lived the same life as the rest of us. It was difficult to reach him… emotionally” – a team-mate is heard saying in The Last Dance. Carrying the responsibility of an entire city, seeking glory to be the very best, Jordan somewhere became an enterprise unto himself. Releasing his line of sneakers for Nike that overshot its first-year targets by about 20 times, there’s a visible change in Jordan’s lifestyle between 1987 and 1991. The youngster, keeping to himself, is now the alpha-male with a cigar in his hand. Chartered planes waiting on the tarmac, an entourage of a dozen people escorting him through crowds everyday, everyone wanting a piece of him – an autograph, a comment… celebrity life had to be exhausting. So, it’s no surprise that Jordan prematurely retired in 1993, because in his own words – ‘he was physically and mentally exhausted’. 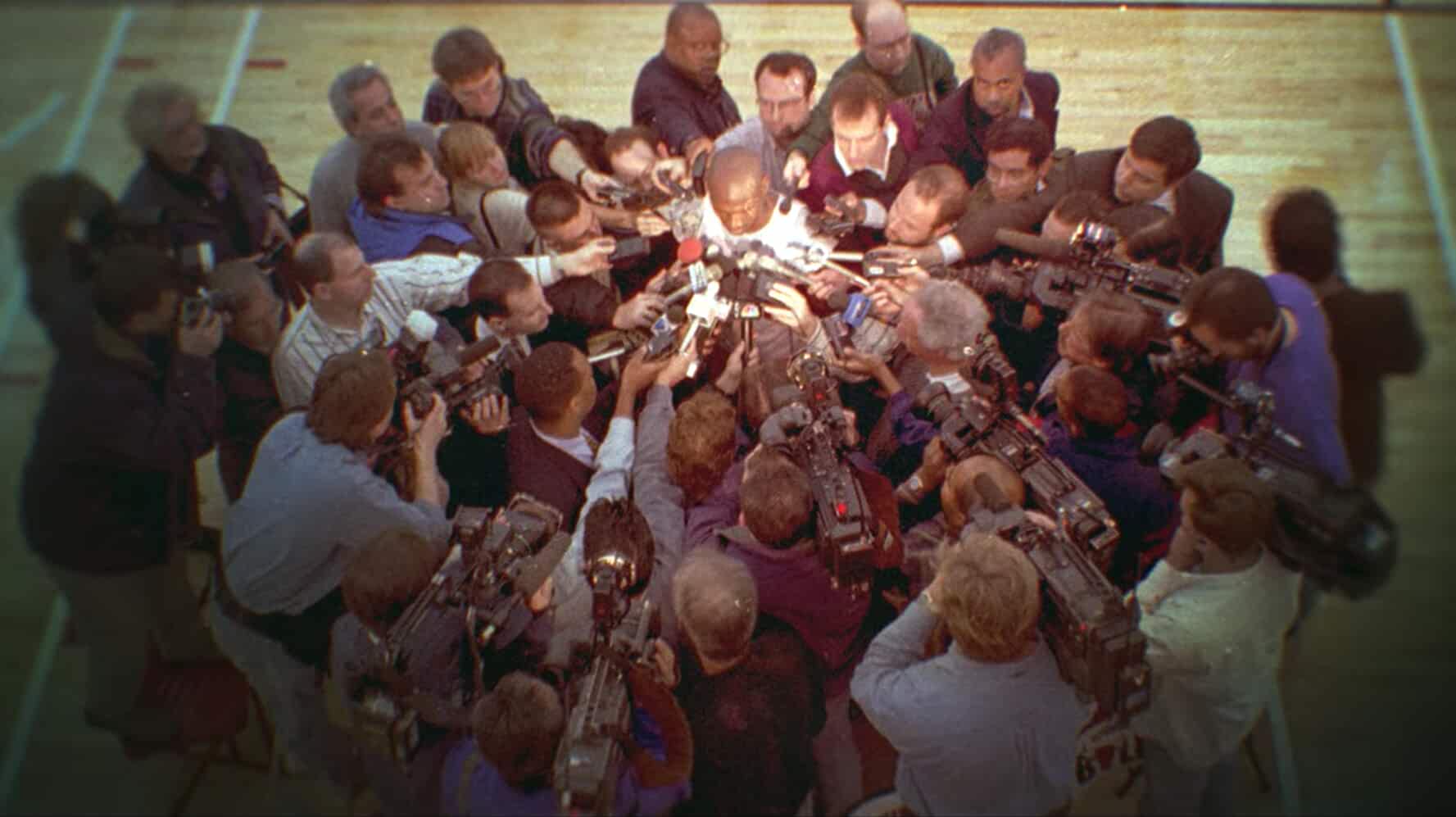 Coming back in the second half of the ’94 season after a brief minor league stint with the Chicago White Sox, Jordan is trying hard to transform his ‘baseball body’ into one for basketball. Training in the off-season while shooting for Space Jam, he meets Denis Rodman, soon to become the third musketeer alongside Pippen and himself. Coach Jackson accepts Rodman’s nature by dubbing him a Heyoka – a backward walking person in a native American tribe. That’s what makes this class of ’98 so exciting to watch. Such a variety of spirits. Pippens’ brisk athleticism, Rodman’s wild inspiration, Toni Kukoc’s workmanlike focus, and Jordan’s all-out killer instinct to top it off, everything gets requisite screen-time in the series.

Ultimately, The Last Dance is also a paean to the legend of Michael Jordan and his unwavering determination to be the best. While demanding perfection from his team-mates, he often went off the rails, crossed a few lines, probably even scarred some youngsters from picking up the basketball again. If wins had to be bought with blood and sweat, Jordan was willing to pay every penny. As he sums it up, “there’s no ‘I’ in team, but there’s an ‘I’ in win”. The Last Dance gives us a front-row perspective of how these dissimilar champions came together, and what galvanised them. There was indispensable talent in Chicago Bulls’ class of ’98, but even talent like that needs to be nurtured with the work ethic of a once-in-a-lifetime genius.

All episodes of The Last Dance are streaming on Netflix