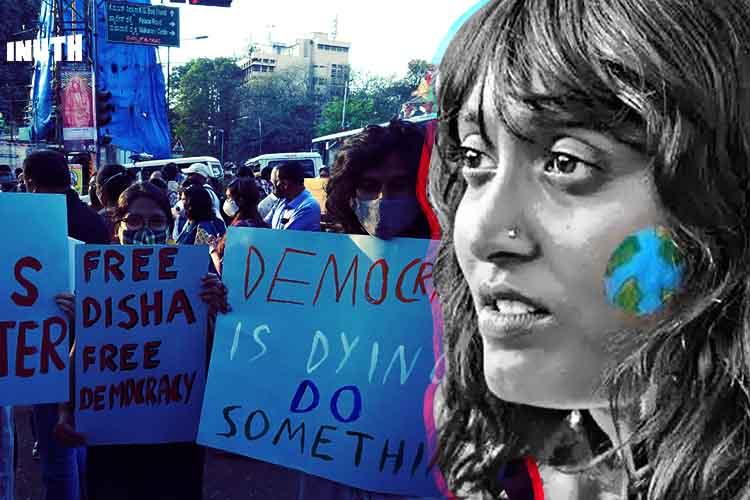 Raising slogans against Delhi Police and holding placards. Protesters gathered at the Mysore Bank Circle
expressed solidarity with the 22-year-old.Some of the placards used to express dissent have been going viral

“The arrest of Disha Ravi by Delhi Police is a completely arbitrary exercise, its an illegal exercise and it violates several established aspects of the law. It violates Delhi High Courts judgment, it violates Home Ministry’s own order in terms of the interstate arrest. Firstly the question must be asked why is it a crime to edit the toolkit, which is an advocacy tool. The toolkit is very much online, if you see the toolkit it has statistics about Indian agriculture if there is a who should be tagged, links to resources.So why is editing this toolkit a crime? There has been no crime, there is just speculation to Khalistan links etc. First, there is no crime, it’s just that she is an independent young woman who is standing with the farmers that seem to be the motivation to the arrest that an independent woman who is not a farmer is extending solidarity to farmers.

Secondly, even if there was a crime the method of arrest is completely arbitrary it’s like an abduction because Delhi police are supposed to inform the Bengaluru police, they are supposed to have translated copies of FIR. There are supposed to let her speak to the lawyer, none of it has been done.