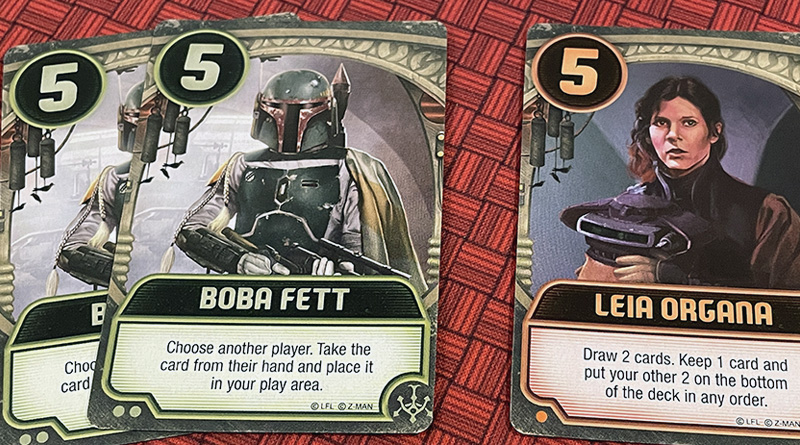 The number of people wanting to plays games over lunch at the company I work at has been growing. And for such a group and setting, the board games and card games that get played are those that are relatively short and can accommodate many players.

So when I got a review copy of Star Wars: Jabba’s Palace – A Love Letter Game from Asmodee, and realized that up to 6 players could play, I knew the perfect place to break it in!

Not only are the Love Letter games fun and quick-playing, but this new iteration is a Star Wars version of the game. And there are plenty of people who love Star Wars at the office.

So what better place to give it a go!

Here are the basics of a Love Letter card game.

The goal of the game is to win a certain number of victory tokens over a series of game rounds. The amount you need to ultimately win is based on player count. And players keep playing rounds until someone reaches that mark.

During a round, players will have only 1 card in their hand (kept secret). On their turn, they’ll draw 1 card and then choose 1 of their 2 cards to play in front of them. When played, they take the action stated on the card. By taking different actions, players may knock other players out. If there’s just one person remaining when the deck runs out, that player wins the round and gets a token. If there is more than 1 player remaining when the deck runs out, the remaining players compare hands to determine the victor.

And that basic flow of play continues with Star Wars: Jabba’s Palace.

However, that’s not all there is to it.

As with every other iteration of Love Letter, Star Wars: Jabba’s Palace brings its own unique twists to the game play as well.

There are a few noticeable differences in this iteration of the game.

First of all, there are Agenda cards that dictate different win conditions. In prior versions of Love Letter, if more than 1 player remains when the deck runs out, players compare hands and the player with the highest numbered card wins the round. However, in Star Wars: Jabba’s Palace, there are 4 different end-round win conditions.

At the start of the game, players randomly select 1 of the 4 Agenda cards. The one chosen will determine the win conditions if there are more players still in play at the end of a round.

The 4 Agenda card options are:

Whichever Agenda card is chosen will be in play for the whole game – it will not change from round to round.

From that you will also see another difference in the game – that there are 2 different factions in play during the game. There are Rebel cards and Jabba’s crew cards. The different factions are denoted both by the color of the card and the icon in the bottom corner.

Speaking of knocking other players out, the #6 Rancor is a doozy. When played, all players with the lowest cards in hand will be knocked out. Not including the #0 Han Solo (frozen), the player who played the Rancor starts counting from 1 on up. If anyone has the called card, they’re out. For example, they call out 1 and no one has a 1, so nothing happens. Then the player calls out a 2 and if no one has that, nothing happens. Then they call out 3, and so on. As soon as someone (or more than 1 player) says they have the called card, they lay it down and they’re knocked out. Then play moves on.

The number of cards in the game and their distribution is also distinct.

As an example, we’ll take a look at the #1 cards. There are normally 5 such cards in a game of Love Letter and they let players guess the card another player has in their hand to knock them out.

With Star Wars: Jabba’s Palace, there are only 3 #1 cards. Two of them are Gamorrean Guards and one is C-3PO. The Guards are like standard #1 cards in that they have the player guess the number of another player’s card. If they’re correct, they’ve successfully knocked that player out. However, with C-3PO, if the guesser is incorrect, then the targeted player gets to make a guess in return by guessing the active player’s card in hand.

Continuing with this twist, there are also 3 cards of #2, #3, #4, and #5. And for each of these two of them are on Jabba’s crew and 1 is a Rebel. And their abilities differ depending on their faction.

The final difference we want to point out is that this version of the game allows for up to 6 players!

We were pretty excited about this change because we’ve often had more than 4 players wanting to play Batman Love Letter.

As mentioned above, the distribution of cards also increases the total number of cards in the game. As such, more players can join in the fun.

Star Wars: Jabba’s Palace is another quick and fun card game most of the family can enjoy playing together.

We say “most” mainly because young kids won’t find it easy to join in. But outside of that, it’s a great family card game.

The rules are very simple – draw 1 card, play 1 card. The game play is quick. Since players are just doing one thing on their turns, the pace of the game is very fast (once players are familiar with the card actions). And the game has a good mix of luck and light strategic thinking.

Because it’s a card game with only 1 card in your hand, there’s a large amount of luck in the game. However, the choices are still interesting every time.

Unfortunately, we haven’t enjoyed playing with a full 6 players like we had hoped. Even with the addition of more cards in the deck, when playing with 6 players, rounds go even more quickly. Which means that each player has less turns – and by association, less opportunity to impact the game in their favor. Plus, there’s more likely a chance to be knocked out of the game even before you get a single turn.

So while we may not enjoy playing with 6 players, Star Wars: Jabba’s Palace has been a big hit overall!

If you haven’t tried any Love Letter games before, go ahead and just dive right in with Star Wars: Jabba’s Palace!

The Board Game Family would like to thank Asmodee for a review copy of Star Wars: Jabba’s Palace – A Love Letter Game.