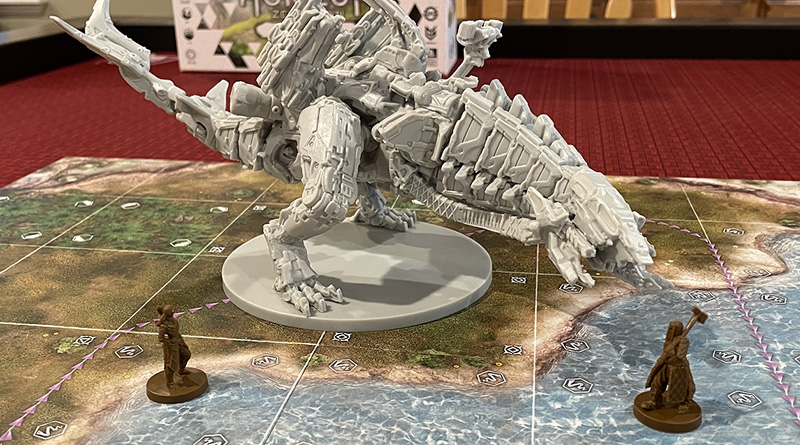 Last week we shared our review of the base game of Horizon Zero Dawn: The Board Game from Steamforged Games.

Since the video game is such a massive, open-world experience, it was clear to see from the outset that there would need to be game expansions to create more hunting encounters for players to go up against even more menacing machines.

That why this week we’re sharing our thoughts on 3 of the game expansions.

The first time I came across a Stormbird in the video game, I didn’t last long. It swooped down, attacking from above, then flew away again and I had trouble trying to find it in the sky. Before I knew it, it had landed on me again and then attacked from the ground. I didn’t stand a chance.

The addition of the Stormbird to the HZD board game is so welcome – and so menacing.

Just take a look at how massively it towers over the hunters on the board. It’s a terrifying challenge to take on unless you’ve leveled up well. Which is why it’s a good thing that you don’t take it on until the final encounter.

Before going into more, here’s what you get in the expansion:

The big twist with this expansion and enemy is what I mentioned at the outset – that the Stormbird has different attacks from the air and when on land. As such, the behavior cards are separated into 2 decks as labeled either Airborne or Landed.

So when the Stormbird activates during the enemy step, players draw a behavior card from the deck that matches its current mode (shown on the reference card). When an action shows a mode symbol, players flip the reference card over to the other side before continuing to resolve any remaining actions.

Another newly added element in the game is Structure Threshold. Because the machine is so large, as players whittle it down, they gain glory points. If a player deals damage that takes the Stormbird over the next threshold (listed on the card), they immediately gain a glory point.

Overall, we like the challenge of taking on the Stormbird. With the towering figure moving around the board, we feel under pressure every time. And with such high hit point value in order to take it out, we like that there’s rewards for damaging it past thresholds. Like we mentioned in our original review though, it’s no fun to have your hunter faint because you lose the glory points you’ve gained. And when it takes a while to take down the Stormbird, the chances of fainting are high.

So combine your forces and try to coordinate your attacks as best you can with your fellow hunters.

The Thunderjaw is another massive machine in the video game that takes some practice to take out. Likewise, getting familiar with how it attacks in the board game is useful in fighting back well enough to take it down.

And like with the Stormbird, facing down this foe when our own hunter miniatures are dwarfed by it is a daunting task.

Here’s what you get in the Thunderjaw expansion:

Similar to the Stormbird, the Thunderjaw has a Structure Threshold that grants players glory points as they damage the beast past certain point values.

While the Thunderjaw doesn’t fly – and thus doesn’t have airborne and landed behavior cards – it does have components that the players will be able to use!

Using the disc launcher takes 2 player actions, but it also lets the player roll 4 attack dice and can do 3 damage on a critical hit symbol.

Another element added in this expansion is the Water terrain type. As you can see on the Thunderjaw game board (used for the final encounter against this beast), there is plenty of spaces with water. While water doesn’t affect enemies, hunters may only make sneak actions while on spaces containing water. They can move into such spaces as part of a melee attack, but it their movement will then stop.

Both the Stormbird and Thunderjaw also have a Barrage attack symbol that targets the hunter that has been attacked the least number of times during its current activation. You know, they’re equal-opportunity attackers.

Among these 3 expansions, The Sacred Lands expansion is the most robust.

Whereas the previous two are focused on one major machine enemy, The Sacred Lands brings in a lot more goodies:

In addition to all this, the expansion introduces a new type of trap card that can be used without using a Tripcaster weapon. Instead of setting the traps by performing an attack action with a Tripcaster, hunters now have a Set Trap action they can perform. If they have a trap card in their hand, they can simply use it for their action. A Trap token is placed on either the same or adjacent space to the hunger.

We also like the new Nora characters to choose from. They’re a welcome addition to the game to help mix things up in how we can work together to defeat enemy machines.

Another addition we like are the terrain spaces on the new game boards that include Zipwires. In the video game, they handy ziplines are a great way to move over an area quickly, high above the heads of enemies. In the board game, hunters can go from one space with a zipwire to the other space with a zipwire as an action – likewise getting around the board quickly.

The new machines in this expansion also introduce some new attack traits. Some enemies can now Stun the hunters which makes the hunters discard cards before doing their evade rolls. The Bludgeon attack trait forces players to discard cards from their hand based on the damage. And the Drag trait pulls hunters into the spaces with the enemies dragging them. And if that enemy moves, the hunter gets pulled to the new space as well.

As we mentioned in our review of the base game, the target audience for Horizon Zero Dawn: The Board Game is fans of the video game. And if you’re a fan of the video game, chances are high that you’re going to want more enemies to fight than just those included in the base game. That’s why these three game expansions are tempting. If you’re trying to choose, we’d recommend you start with The Sacred Lands expansion first.

We’d like to thank Steamforged Games for review copies of Horizon Zero Dawn: The Board Game and expansions.