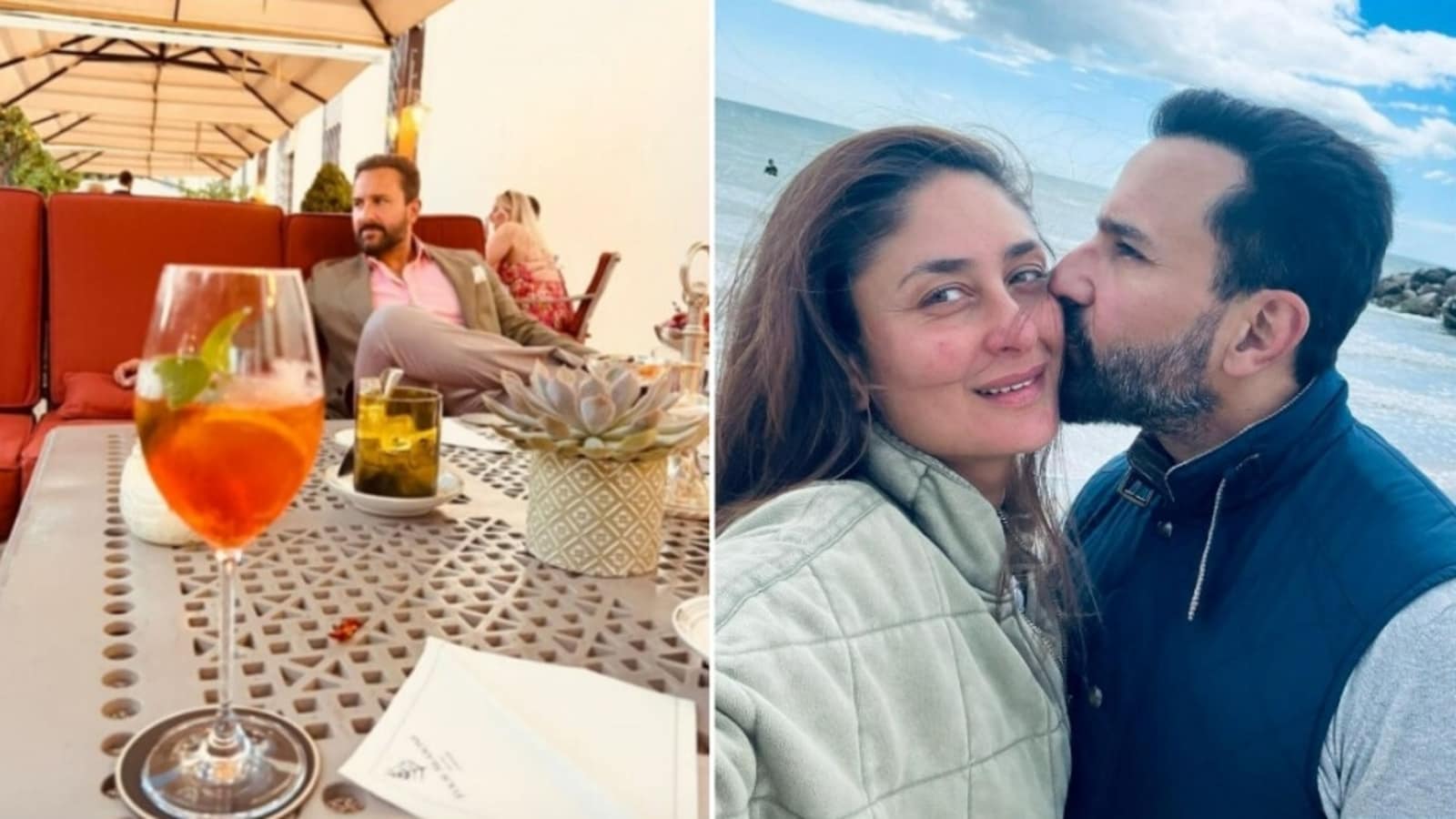 Kareena Kapoor and Saif Ali Khan are in London on a family holiday. The couple stepped out together on Saturday. Sharing a photo of Saif on Instagram, Kareena wrote, ‘A view of this evening’.

Kareena Kapoor and Saif Ali Khan have been on adventures in the UK and have been attending everything from family dinners to concerts together. The couple along with sons Taimur Ali Khan and Jahangir Ali Khan have been on a family holiday for several weeks now. Kareena shared a glimpse of her special outing with Taimur on Saturday. Hours later, the actor shared a picture of Saif as the pair went on a date together. Read more: Kareena Kapoor’s London trip includes ‘messy gelato’ sessions with son Taimur

The latest picture she shared from London is of Kareena and Saif outing at a cafe. She shared a candid picture of husband Saif Ali Khan, in which the actor is seen in the outdoor seating area; He is looking away from the camera. Saif is wearing a gray suit and a pink shirt. While Kareena is not seen in the photo, her drink in a tall glass is in front and in the middle. Next to the drink on the table is a tissue napkin with the logo of the Four Seasons Hotel London. Along with Saif’s solo photo, Kareena wrote on her Instagram stories, “Today’s evening view.”

Earlier on Saturday, Kareena shared many pictures with Taimur Ali Khan. While Kareena wore a yellow top and matching shorts, Taimur also wore shorts with a yellow and white T-shirt. The mother-son duo were seen enjoying gelato as they posed in front of the yellow wall. “Messy gelato series with Tim (Taimur),” wrote Kareena while sharing her pictures.

These days Kareena is holidaying with her friends and family. She recently met sisters Karisma Kapoor and Amrita Arora and Natasha Poonawalla. The four posed together for glamorous group photos, which they shared on their Instagram handle. Kareena and Saif also joined their aunt, actor Neetu Kapoor, for her birthday celebrations on July 8. They went for a family lunch which was also attended by the late Rishi Kapoor and Neetu’s daughter, Riddhima Kapoor and her family.

Before going on a family vacation, Kareena had finished shooting for her upcoming film, which is based on the Japanese novel The Devotion of Suspect X. This film marks his OTT debut; It is directed by Sujoy Ghosh and also stars Vijay Varma and Jaideep Ahlawat. On the other hand, Saif will soon be seen in Vikram Vedha opposite Hrithik Roshan.