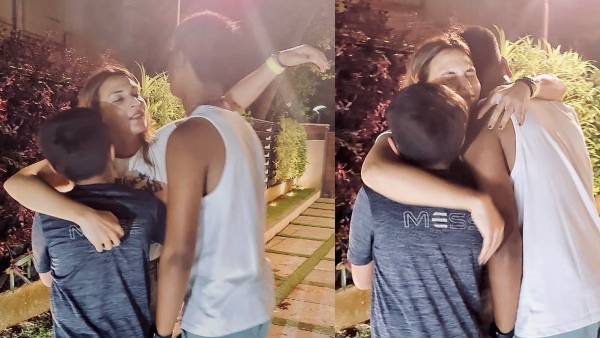 Aishwarya Rajinikanth and Dhanush, the former couple are now setting an example by co-parenting their sons, Yathra and Linga beautifully. Recently, Aishwarya was reunited with her kids after coming back from a trip with her father. The filmmaker shared adorable pictures with Yathra and Linga on his official social media handle, leaving his followers very happy.

In the candid pictures, Aishwarya Rajinikanth is seen sharing a hug with her sons. ,Sometimes…. all you need is their hug ️❤️#sonThe filmmaker wrote on his official handle while sharing pictures with Yathra and Linga. The lovely pictures are now winning the internet.

Pictures of the National Award-winning actor with his sons from the premiere of the Russo Brothers directorial created a flutter on social media. The boys wore black tuxedos to the premiere, where their father Dhanush looked as handsome as ever in his new look.

Let us tell you that Aishwarya Rajinikanth and Dhanush had announced their separation earlier this year. It is being told that the couple was going through marital issues for the last few years. Even though the couple tried to make their marriage a success, they eventually decided to part ways due to irreconcilable differences. In their official statement, Dhanush and Aishwarya made it clear that they plan to remain friends and co-parent their children, Yathra and Linga.

Coming to her filmmaking career, Aishwarya Rajinikanth made a successful comeback with the music video

Traveller, this year. The filmmaker is reportedly planning to make his Hindi directorial debut with a multi-starrer project soon. Sources close to Aishwarya Rajinikanth say that she may make an official announcement soon.