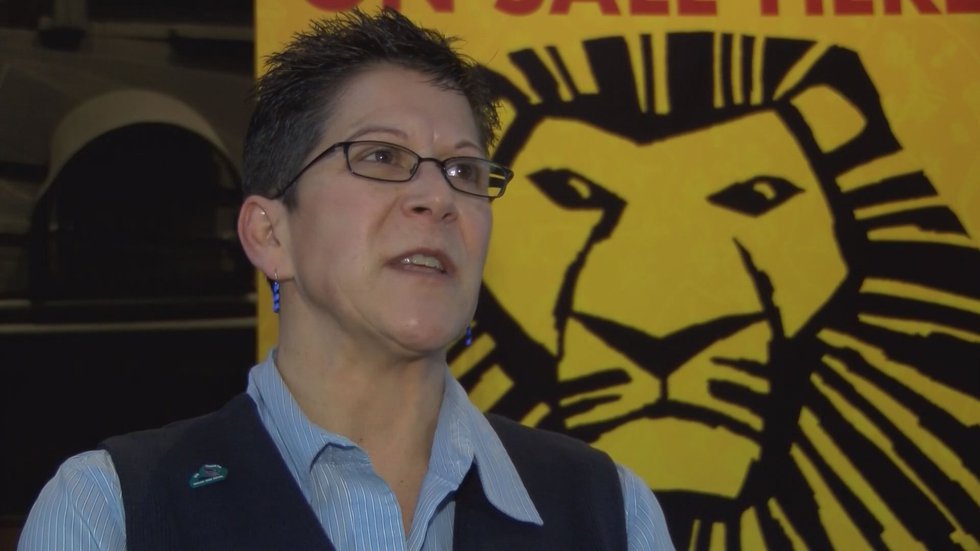 When I asked to speak with Leslie Broker I was told we would stay together because she was a fellow “theatre nerd”. What a silence The president of Broadway Across America Midwest, Ms. Broker lives and breathes theatre. When we spoke she had spent a whirlwind week in New York City watching eight Broadway shows in seven days. Thank goodness for the matinee.

Michael Smith: First, please tell our readers what you do, how long have you been doing it and how can I apply for your job when you decide to retire?

Leslie Brocker: (laughs) Absolutely you can! I have been here for 35 years. I started in the marketing department but I have loved theater my whole life. In fact my passion has been in radio and television production, especially in radio. And so I worked with a local Broadway chain in Louisville (Kentucky) on some of their radio purchases. This is how the local company appointed me as its marketing director. The company became so successful that it developed into Cincinnati, and then to Columbus and Indianapolis. Eventually our partner, the Pace Theatrical Group, bought our company, and so did Kansas City, part of my responsibilities.

MS: Which city do you think about choosing the show to go to? Is it just a national tour of certain shows or do you choose specific shows for specific cities?

LB: Tours are tailored for each city. It’s a puzzle trying to figure out what shows are available, what dates are available in theaters and then marry them. We rely heavily on our neighbors and friends who are in other cities to make routing fair and responsible. We need cities with decent jumps that are not too far away. We are all tied together. Most of our shows close on Sunday nights. Then they have to break up, move and be ready to go for screen time on Tuesday. It’s all very well calculated. That’s the sexiest part of it. Another way we choose shows is by surveying our customers and single-ticket buyers and group customers and see what’s on their list. What do they want to see? We do surveys not only about shows that are current and will go down the road, but also about shows that are in development, so we’re going to build for the future three or four or five years down the road. Can raise voice in voice.

MS: I was in the film marketing and promotion business for 20 years and had to deal with not only first theaters but second runs and discount houses as well. If a show is currently on Broadway, is there a time limit before it tours?

LB: That’s a good question. is not there. But I think the comparable analysis might be that when a show hits the road, the first thing they want to do is play in markets that can sustain it for a long time. So many shows that come from Broadway will sit in Chicago or Boston or LA or even the Kennedy Center (Washington DC) and then they start watching the next markets. Where can they play for a few weeks instead of several months? This includes cities such as Cincinnati, Ft. Lauderdale, Denver. Markets that can support the show for up to two weeks. And where Kansas City fits in, where most cities are, a weekday group. The way you stand in the pecking order is that shows want to play where they succeed. People in Kansas City love theater, and we can do several weeks of shows. Kansa City usually kicks off in the first or second year of the tour, which is really great. Other cities, such as Indianapolis, are in their third or fourth year of tour. Kansas City rushes to line up for the best shows as fast as they come out.

MS: When Ellen (McDonald, my local representative) and I talked about this interview she said you were a theater nerd. You are very much so I have a few questions. Which was the first show you watched?

LB: No, that was a local production. My first Broadway show was “Barnum,” starring then-unknown Glenn Close and Jim Dale. How are you?

MS: My first show, which I wasn’t a part of, was “A Chorus Line,” which I watched here in Kansas City with an unnamed babe Neuwirth as Cassie.

LB: You just gave me goosebumps.

LB: Certainly it was a very good starting point.

MS: Which is your favorite show, if you could have one?

LB: It’s like having to choose between your kids. I would say the first show I worked on was “Hello, Dolly” and it made such an impression. I was able to perform “Hello, Dolly” eight or ten times with Carol Channing and we became friends. That’s my favorite show. The book is incredible, the music… not a bad number. Well, maybe “Ribbon Down Your Back” is a little slow (now that’s a theater nerd!) but the show is awesome. And then to be friends with Carol…. We spent many times together beyond “Dolly”. I brought her in a couple of times in the second half of my life to do some fundraising and things, which was amazing.

MS: I guess the answer is “no,” but is there a show you want to watch but never have?

MS: Over the past 10 years, there have been countless musicals based on popular movies. why do you think so?

LB: I think it’s similar to movies based on books. One is the following. Producing on Broadway is incredibly risky and I think the foundation of a successful film gives a safe jumping off point. I wish there were 20 new musicals and 20 new plays a year, but creativity comes with little. If you’re lucky you’ve got a Sondheim, who can spit a lot of them. But that success is hard to come by. I don’t know why that is, but I’m guessing it’s a bit of a safe ground. I mean “Hadstown,” the Tony Award-winning musical, is hugely popular on Broadway, but not many people outside of New York know about it. It may take a few years for people to really figure out what a great show this is.

MS: Finally, any hints on what might be on our way next season?

LB: We’re really starting next season. We’ll be hopeful and look for shows like “Frozen” or “Moulin Rouge.” This year’s Tony Awards will help decide which shows get recognized and what can tour. One show I would really like to do is “To Kill a Mockingbird.”

LB: Yes. You know, the show has a cool casting twist. I don’t remember her name, but the little girl who plays Scout in the movie….

RS: … there you go. He is in this production. He’s a dirty, racist neighbor…

MS: This is my favorite novel of all time.

LB: I’m working hard to even get it. The pipeline is full.