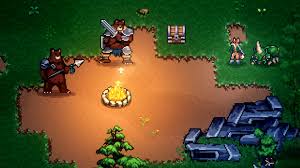 Recently I spoke with Felix Lockel, the developer of Off Blades and Tails.

The plot takes place in a future where humans have disappeared from Earth and magic has returned. The animals have taken on human-like characteristics and have established a society and technological progress that dates back to the European medieval era.
At the same time, the rise of sometimes-spirited insectivores is causing growing concern among animal tribes…
The lore is inspired by the classic 90s adventure game Inherit the Earth.

There aren’t really classes, as many as many specialized skill paths. Each scale with different combinations of attributes and offers better bonuses, abilities and skills, the more you invest points in it. There are also special skills that need to be specifically taught by someone/something in the world. As for the type of skill? We have unarmed, one-handed, two-handed, colorful, different types of magic… and they’re just crime-focused! There’s shields, athletics, covert tactics, and more to discover.

Upon reaching a new level, our character gains both a skill point and an attribute point. This allows them to upgrade their base stats as well as invest in one of a multitude of skill progression paths. Additionally, leveling affects the level of equipment pieces that can be dropped from defeated enemies.

The main player character can be customized in two different ways. First, we have their base properties, which provide passive bonuses and weapon/skill scaling. Then, we have the skills, facilities, and abilities that can increase our effectiveness in combat, as well as provide us with many useful tools, techniques, tricks, and spells to shape the battle according to our priorities. All and none of them will be able to be reset and delivered anew for no cost. Finally, we have the gear and equipment. In addition to a minor graphical change based on what the character is wearing, equipment pieces will boost our attributes, provide useful bonuses and multipliers to stats and sometimes enable us to benefit from unique special effects. Pieces of equipment can be further enhanced by raising their level to keep their performance with us. Our character can also find an exploration/traversal tool long enough ago, provided we can find it.

Typically, equipment has a chance to fall from defeated enemies. You can also find some useful gear in any crate or treasure chest you might stumble upon. Trading with Smith & Traders is also an option. The types of equipment you get may vary. They are usually divided by rarity, going from common to epic, and often have priors and suffixes that modify the bonus received when equipping an item. There are also mythical objects hidden around the world… and often preserved.

Since there are no fixed classes, I usually try different builds, focusing on one or two weapon types and see if some encounters can be made with them. It should be possible to beat the game with each type of weapon, but of course some of them will make playing more demanding than others in certain situations. However, it is entirely up to the player to mix his skills and weapons the way he wants.

The game is single-player with no planned online features. This could of course change at some point.

With my publisher, we would love to release blade and tail Also on PS4/5, but we can’t promise that at the moment. It’s in our plans though and we’ll announce the PS4/5 title as soon as we’re sure we can keep that promise to players.

Adding environmental impacts and potential chain reactions to the game’s turn-based system proved a challenge. It’s not something I’ve seen coming when I thought “hey, let’s add explosive stuff to the world and make them explode when you kick an enemy…”. Several issues surfaced over the following weeks, but this was a good fighting chance to test the turn-based combat system.

The music selection earned a lot of positive feedback from the people who played the demo!
When I started out with the game I had no budget for a composer so I searched for different sources of royalty free music and found a lot of really catchy tracks! Each track and composer is mentioned in the credits.

There are currently no plans for the game beyond the 1.0 launch. I want it to be a great and fulfilling experience. That’s why I’ll support the base game for a longer period of time and add more content to it instead of stripping it of DLC.