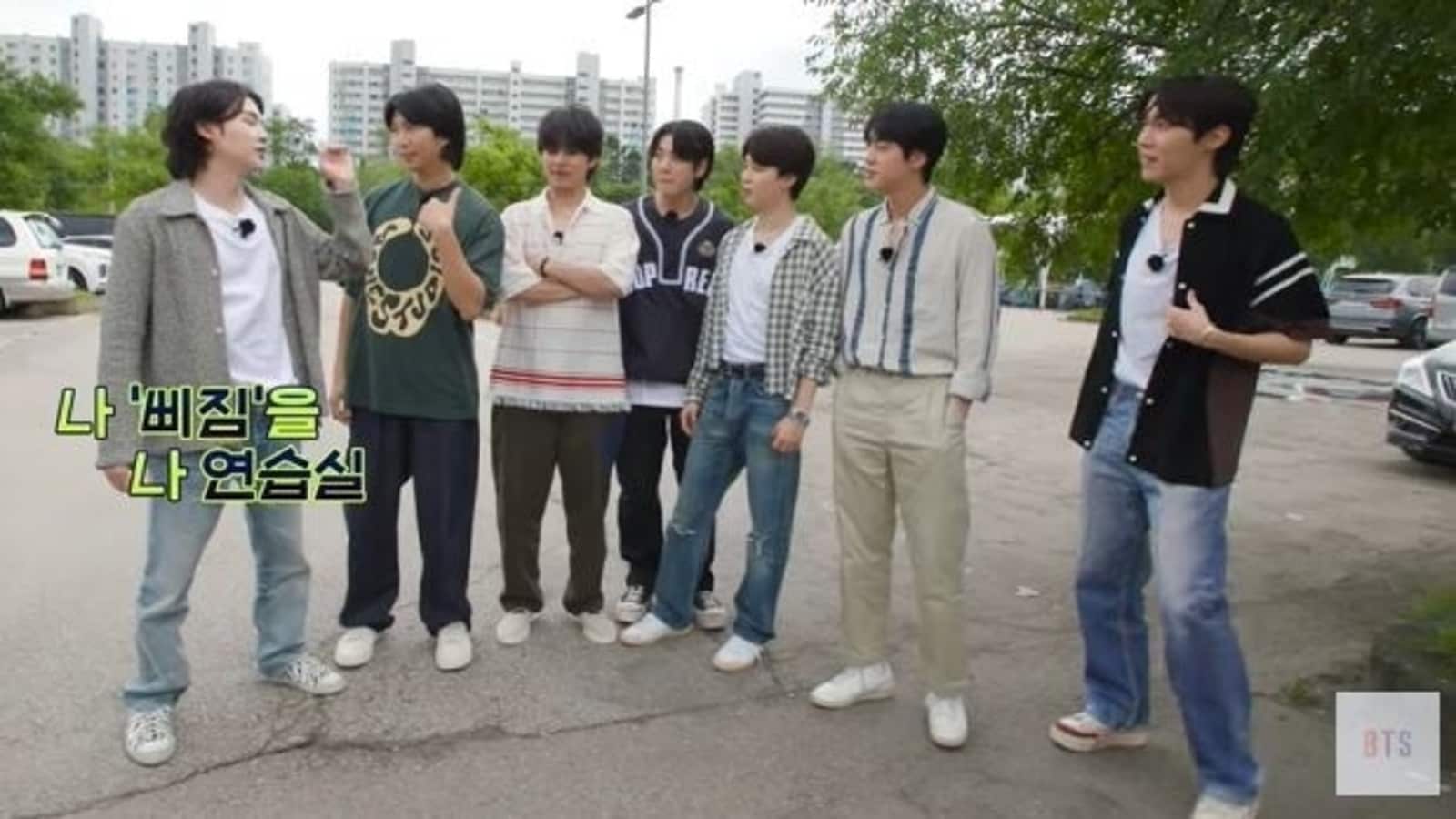 BTS members RM, Jin, Suga, J-Hope, Jimin, V and Jungkook traveled to Seoul as they participated in a special episode of the variety show, Run BTS – Telepathy Part 2. In the latest episode on Tuesday, the members were cast. separately to start your telepathy game. They had to find each other’s locations for the first round. RM, Jin, Jimin and V met in their first dorm; Suga went to the Han River; J-Hope went to the Olympic Stadium and Jungkook went to Lotte World. (Also Read | Run BTS teaser: J-Hope says BTS is ‘one in body and soul’,

During the episode, the members take a trip down memory lane while visiting their dorms, talking about eating ice cream, going to a specialty restaurant, and taking a walk near their dorm. He also recalled the famous dumpling incident (involving a heated argument between Jimin and Wei) and the banana incident (when Jungkook noticed the fruit missing from the fruit basket ARMY had given him. At the time, Jungkook argued that It was his and J-Hope got it. Enraged, threw a banana at him and said, ‘eat you all’).

Taking a walk near his hostel, RM recalled how the members used to walk on the street every day during the early days of their careers. He also told how he and V were caught eating ice cream. Recalling the exact location, RM said, “I was caught right here. I took the ice cream cone and stuffed it in my pocket. He (the person) asked where we were going, so we just said, ‘Back to our hostel’. In the end, the ice cream melted in my pocket, but I didn’t want to ruin it. So I took it off and ate it again.”

While RM and Jimin took a walk, Jin and V feasted on jajangmyeon (Korean noodle dish). Suga was sitting in her car outside the restaurant where the former members frequented. The members tried to locate each other’s locations while traveling in their cars around the city. In the second round, Jungkook was joined by RM, Jin, Jimin, and V. Suga also met J-Hope near his old dorm and shouted ‘my friend’ from his car.

All the members met at Jamwon Han River Park and hugged each other. For a few moments, they forgot about filming and kept asking each other where they had gone before. The crew had to intervene and ask him to face the camera.

In the final round, the members were given the ARMY keyword. Although they were together, they could not discuss where they would go separately. RM kept pointing to J-Hope, “We can go back to where we’ve already been.” He suggested the Olympic Stadium. All the members were seen walking towards the venue except V, who had chosen BTS’s first showcase venue. “I will ask Sena if this should be the first concert or the first performance,” he said. However, he became shy and could not ask anyone out despite several attempts at Garosu-gil.

The video ended with all of them meeting for lunch during which the members discussed what to do next. RM suggested ‘just bring in middle-aged men from the neighborhood and play 7-7 volleyball’. Jungkook suggested that they learn Sepak Confrontation, a sport Jin asked about farming, and came up with the idea for Suga Racing. “I want to try pole dancing too,” Jimin said. RM said, “However it suits you.” The video ends with V goofy, “Run BTS Chalte Rahega.”