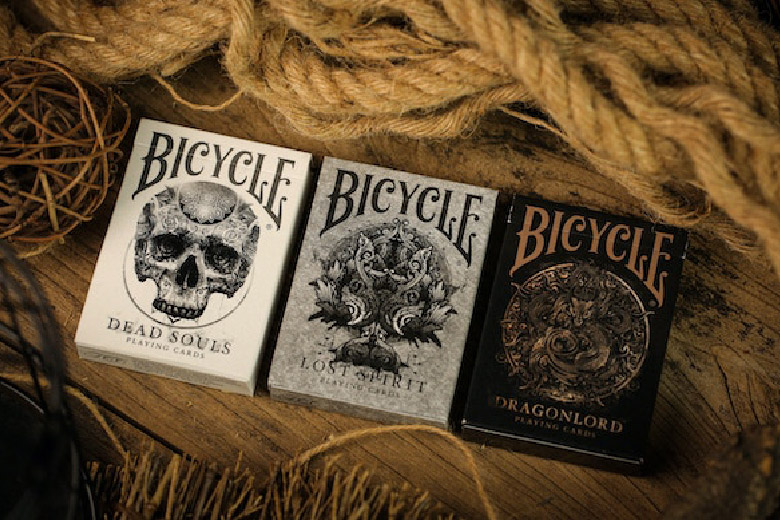 Two years in the making, the Bicycle Apocalypse series by TCC features the dark art style of Sam Hayles, known for his popular Karnival series. Three unique decks are available during the Kickstarter campaign: Dead Souls, Lost Spirit, and Dragon Lord. As you would expect, all 3 decks are fully custom with bold and exquisite illustration lines, giving the decks a touch of mystery and macabre.

This fully custom deck follows the art style of the Karnival decks, with skull and gothic design elements. Compared to the mysterious first edition, the new edition comes in a white colorway.

Inside, all card faces were redesigned, and the extra smoke rendering adds detail to card faces. Skull, spine, ribs, and carpal bones… each card faces are skeleton images. You can use the cards to put together a complete skeleton! 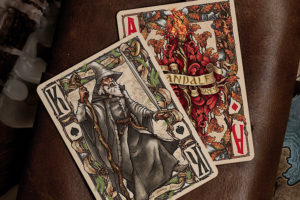 Trending
First Look at The Lord of the Rings Playing Cards

The courts are noblemen who are illustrious in their lifetime but still unwilling to return to the dust after their death, you can try to imagine their evil story. Joker’s bones belong to the ruler who still wears a crown on his head after his body has decayed and is unwilling to leave his throne.

Printed by the United States Playing Card Co. and limited to 2988 decks. Only 1,000 will be made available for the collection box.

A 100% custom dragon theme deck designed with a combination of east and west design elements of the dragon. The mysterious deck is presented in a black and white colorway.

The deck features custom intricate hand-illustrated Ace and Jokers, prominently featuring the dragon. The design of face cards is updated with a black and gold color palette instead of the regular red and black suits, and a dated look to fit the overall theme of the deck.

The card backs showcase two awing dragons and black background without white edges. This Bicycle-branded deck is printed by USPCC and limited to 1343 decks. Only 1,000 are available in the collection box.

A macabre deck featuring fully custom artwork in a gray/silver colorway. Within, the face cards showcase fantastic detail and intricate design. Spade, clubs, hearts, and diamonds all use standard traditional suits, and the face cards are updated with a gray and white texture, adding a dark, and strange vibe.

For the card backs, the overlay of several layers of texture further enhances its already strong sense of solemnity, creating a mysterious and noble sense. Two jokers are Death who wears a black cloak and stares out of the frame.

Printed by USPCC and Limited to 1260 decks. 1,000 will be made available for the wooden collector box.

Wooden boxes have long been the top and most expensive collector’s option. The elegant set includes all three decks and coins in the release, stored in a wooden collection box. The design of each deck is to the coin collection, and each unique artwork and design element is clearly visible on the coin.

The Kickstarter is scheduled to launch on 20th August. Pledge starts at $59.90 for the box set (Early Bird Price is 45% OFF).