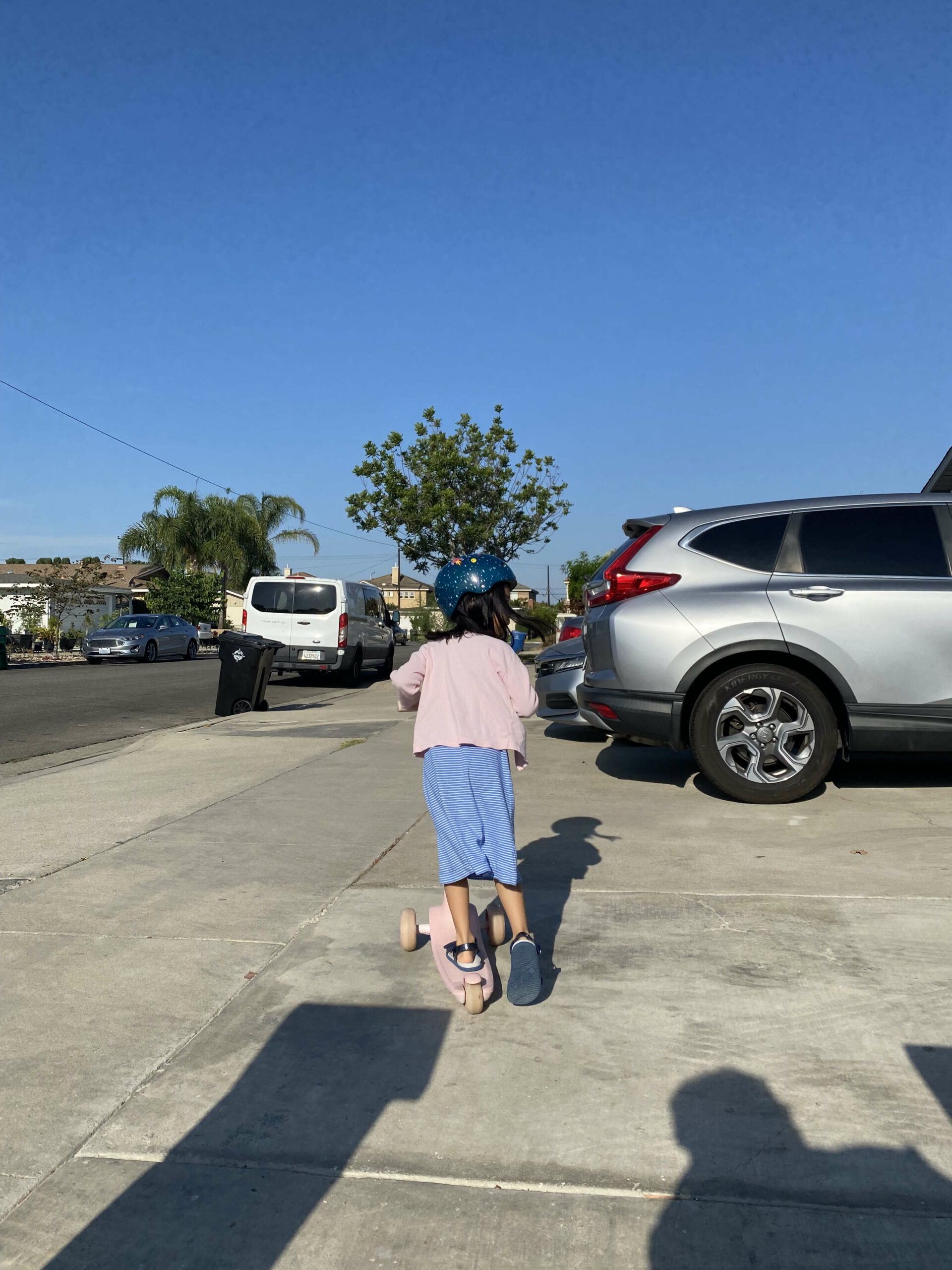 Inspired by Michaeleen Doucleff’s book, Hunt, Gather, Parent, and the show Old Enough on Netflix, I decided to teach my 5-year-old how to scoot to grandma’s house independently.

I would never do this in SF

My wife and I lived in San Francisco for 13 years, 5 of them with kids. I’ve dreamed about teaching my kids autonomy by letting them walk to school more independently, but it never felt safe because of the homelessness and general crime in SF.

Our school was only a 10-minute walk from our home. I truly believe that if she had to, our 5 year old could have made the walk.

To practice, I would bike the girls to school, park at the street corner, and encourage them to walk to the school gates by themselves. It was slow going.

At first they didn’t want to. After a few days they walked a few steps. Then a week later they made it halfway. All the while, I made sure to let them know, “Practice makes better. You’ll make it further little-by-little each day. Don’t feel rushed. Take your time and you’ll get there.

Important: Kids mature at different paces. It’s more productive to encourage and let them know that they’ll do it when they’re ready as opposed to forcing kids to do something. In this example, if I had forced them to walk to the gate, they would have resisted harder and probably developed a fear of walking independently.

For many reason, my kids never made it by themselves to the gate.

But we soon moved to the suburbs and my chance to teach autonomy through independent walking was reborn.

In Julie Lythcott-Haims’ book How to Raise an Adult, the opening pages describe a scene that is a parent’s worst nightmare. A mother left her child alone in the mall in order to do some shopping. The child was abducted and killed.

How can I encourage my 5 year old to venture out on their own?

I know for sure that my dad would think I’m crazy and disagree with my actions. This is the scrutiny that Lenore Skenazy received when she was labeled the world’s worst mom for letting her then 9-year-old ride the train in New York by himself.

Do the benefits really outweigh the risks?

It’s really all in the details. Each child is different; each city or suburb is different. Personally, I don’t know when is the right time or where is the best place to do it. San Francisco was not the right place, but a neighborhood suburb only 2 small blocks away feels right to me.

Julie Lythcott-Haims wrote about many statistics that show a child is much safer today then in the past and the chances of abduction are incredibly low, but it’s absolutely a non-zero chance.

How I’m approaching the lesson

On a Monday evening, I showed my 5-year-old a video from Old Enough that shows a 3-year-old Japanese kid crossing the street all by himself and buying groceries.

The next morning I asked my 5-year-old, “Are you ready to scoot to grandma’s house independently like the little boy you saw on the TV?”

“Ok. Take it slow and easy. Watch out for cars in the street and backing out of the driveway. If you need anything, just yell for help.”

And off she went.

All these crazy thoughts ran through my head. After about 1 minute I left the house to make sure she made it to grandma’s safely.

Walking along the street, I couldn’t see her in the distance. Had she been kidnapped? Did she get lost? Did I send her off on her own too soon?

As I rounded the street to the cul de sac, I saw my 5-year-old beaming with pride in front of Max the dog. She ran to me and exclaimed, “Papi, I got her all by myself! And I was careful about the cars.”

I don’t know the exact age, maturity, or location that will work for your child, but it’s worth it.

This article is part of Jun Loayza’s parenting series, Dad Smarter, Not Harder. Jun developed the GrACE framework for raising children. A = Autonomy.

Get mentored by Yu-kai Chou

Every week I hop on a conference call to teach, answer questions, and give feedback to members of Octalysis Prime. If you want to take your Gamification practice to the next level, then come join us.

Would you like Yu-kai Chou to work with your Organization?

If you are interested in working with Yu-kai Chou for a business project, workshop, speech or presentation, or licensing deal, please fill out the form below.

I let my daughter scoot to grandma’s house all alone 😱