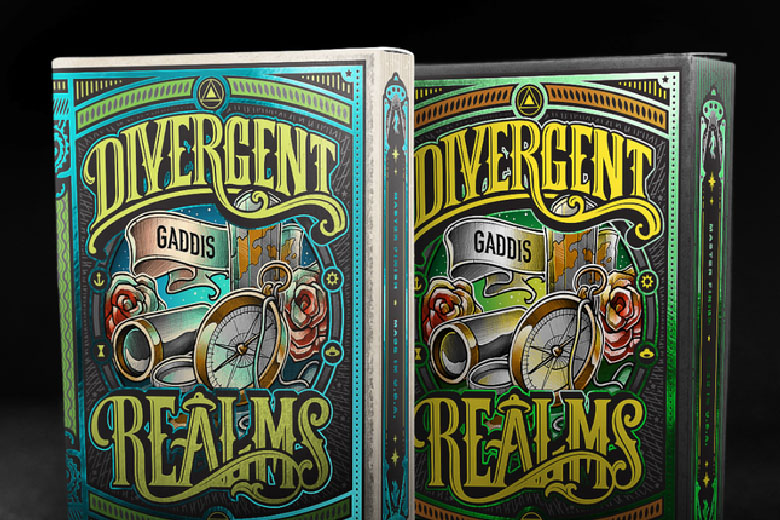 Costa Pantazis is a British musician, poet, comedian, and self-help satirist who enjoys playing cards. What begins as a little hobby of collecting cards, he ventured into creating his own brand of playing cards. His first successful project is the Primordial Playing Cards, a deck based on Greek mythology. In 2020, Costa started a series of playing cards revolving around people who pioneered the historic studies in the realm of supernatural mysticism, ancient aliens, dangerous technologies, and dark secrets. It is named “Divergent Realms”.

Divergent Realms will have up to 6 decks in the series, each deck with two variants – “Revealed” shows a colorful and bright scheme and “Concealed” shows an inverted dark scheme. It is expected the series will have a total of 12 decks – another 12 additional decks if gilded cards are counted in. A “volume” is named after a historical character and has a theme revolving around that character. All artworks for each volume are different. The previous two volumes had been successfully created – Vol.1 is about Sidney Gottlieb and the aspect of mind control; Vol. 2 is about Michael Faraday and the investigation of the spirit board. The current volume is now live on Kickstarter – Vol. 3 that revolves around the mystery of the Bermuda Triangle, which phrase is invented by Argosy’s magazine author Vincent Hayes Gaddis.

Trending
First Look at The Lord of the Rings Playing Cards

Inside, the back design of the cards features a series of imageries surrounding the myth of the Bermuda Triangle, such as the prominent shape of a triangle on both sides and the picture of a ship sailing on the seas. There are tentacles in the illustrations, hinting that a sea creature might be suspected in the missing vessels. There is also spotted a picture of a UFO beaming up a human, indicating that the Triangle might be the work of aliens. The back design is bordered and will be printed in metallic ink. “Revealed” edition uses turquoise blue color while “Concealed” uses emerald green color. The gilded variants of the decks are gilded with metallic foil based on the edition’s color.

The artworks for the face cards are 100% custom. The Aces featured bigger pips with detailed iconographic. The Ace of Spades featured a sailing ship attacked by a sea creature. The numbered cards featured customized pips with unique pip arrangements and there is a background artwork behind those pips, which also can be found on the Aces.

The courts showcase brilliantly illustrated characters composed perfectly within the frame border. These characters are related to the mysteries of the Bermuda Triangle: from the sailors and pilots who got lost in the waters to the humans hiding the aliens within. These are the works of Blackout Brother, also known as Charles Adi, a designer from Indonesia.

Each volume of “Divergent Realms” have its own customized coin, further exploring the theme of the deck. In Gaddis deck, the coin shows the sea creature called “Kraken”, a big cephalopod creature capable of destroying ships and taking the lives of seafarers. Also included is a metal card with customized artwork detailed etched that represents the entire series.

The tuck box for the deck is made with premium stock with metallic foils and embossing. It is made to look like a book, which if you line it up with the other decks, will create like a small collection of books. It has an interior artwork with a repeating pattern with the name of the character featured. Every deck will have a custom numbered seal.

The decks will be printed by the United States Playing Cards Co. and pledge starts at $12 for a single deck OR $24 for both decks on Kickstarter.