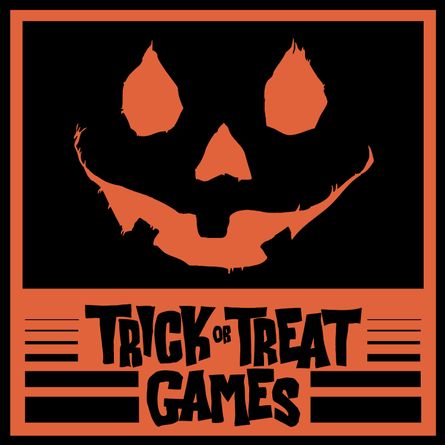 One of my last stops at Gen Con 2022 was at the Trick or Treat Studios booth, a company I had covered just ahead of that show thanks to the debut of Nightmare Productions, its new horror-themed version of Reiner Knizia’s auction game Traumfabrik. As it turned out, the publisher had lots more future releases to tease, with director of business development Joe Stoken and developer Andy Van Zandt giving brief overviews of what’s coming.

• Let’s start with The Texas Chainsaw Massacre: The Game, a 2-4 player semi-cooperative game from Scott Rogers due out in Q4 2022. Here’s the short take:

The Texas Chainsaw Massacre: The Game is based on the 1974 movie of the same name, and the plot of the game follows that storyline. You and your friends have run out of gas on the side of the highway and need to find help. You need to search for keys and gas by using actions to flip tokens, and once those items have been found you need to get back to the van in order to escape. 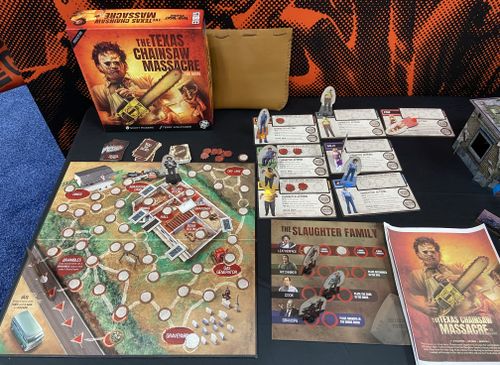 Leatherface will chase the players throughout the map, and if he catches a player, he takes them to the Killing Room. Once there, the player has three turns to attempt escape before Leatherface eliminates the player.

As you reveal tokens, they go into the “leather flesh bag”, a mock-up of which is shown next to the box and which had a nubbly interior surface to feel unsettling on your skin. Stoken noted that the game will come with standees, with plastic miniatures available separately for those who want to mix plastic and leather.

• Shadowgate: The Living Castle is an adaptation of the 2014 video game Shadowgate that’s being co-published with 317 Games and that plays as follows:

Shadowgate: The Living Castle is a 2-4 player semi-cooperative board game in which the players can choose between eight characters that have their own unique class, traits, and abilities, then use these characters to compete for XP (experience points). 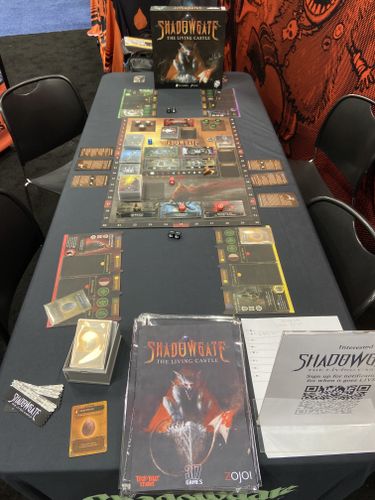 For each item you equip, each quest you complete, each djinn riddle you answer, and each monster you defeat, you gain XP. Once the players uncover and rebuild the legendary Staff of Ages, they take on the Warlock Lord and the Behemoth by bidding against one of the final quest cards. The player with the most XP at game’s end wins and is crowned High Lord of Westland! 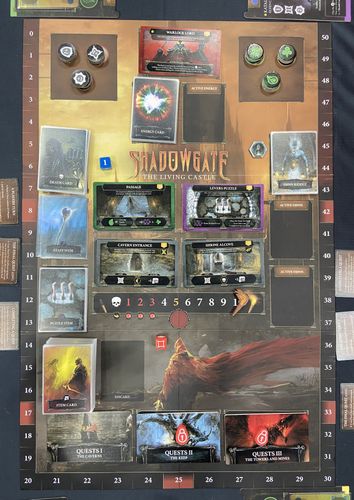 • Trick or Treat Studios has a ton of licenses for horror movies thanks to its primary business — selling masks, costumes, and props — and it’s creating games for many of these licenses, such as Saw, Child’s Play/Chucky, and the Universal Classic Monster line, with the latter being a deck-building game from David Gregg, best known for 2011’s Nightfall. Emerson Matsuuchi, who already created the widely regarded Specter Ops, is creating a hidden movement game based on the original Halloween film from 1978 that’s due out in Q1 2023.
For a non-licensed, more family-friendly spooky game, Trick or Treat is releasing a new version of Gwenaël Bouquin and Bruno Faidutti’s 2004 card game Knock! Knock! under the title Halloween Party. Here’s a summary of this 3-6 player game:

On Halloween night, each player holds a big party in their dark castle and tries to attract the most interesting people — vampires, ghosts, and other monsters. Regularly, there is a knock on your door — knock, knock! — and you must decide whether to open or not. Of course, every player tries to open to the nicest people and to avoid unwelcome visitors such as pure souls that will scare your guests as well as vampires sent by your opponents to lure your best guests into their castle.

• Aside from the horror titles, Trick or Treat Studios plans to launch a “Classic Collection” line that initially will revisit a number of titles previously published by Tasty Minstrel Games, for which Van Zandt previously served as developer. 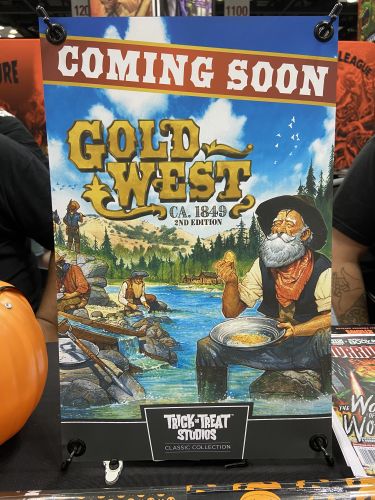 The first title in the line will be a new version of J. Alex Kevern’s Gold West, which was first released in 2015. This edition will feature art by Vincent Dutrait and a new optional water expansion.

Other titles in the “Classic Collection” line will include second editions of 2009’s At the Gates of Loyang from Uwe Rosenberg, 2010’s Luna from Stefan Feld, 2014’s Scoville from Ed Marriott (who mentions possible changes here).