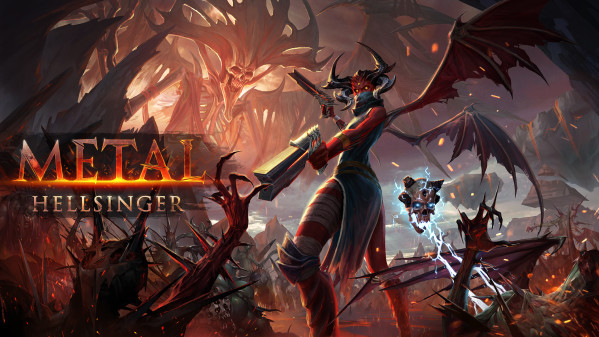 It seems like almost forever the first rhythm games were all the rage. whether it was Patapone with your own unique action/adventure style, or something more traditional like guitar master, with its plastic accessories and frantic gameplay. This went on for years, where a new version of the games were being released or some twists appeared on the genre. Then something happened in early 2010, where they all disappeared as soon as they appeared. Sure, there have been other rhythm games since then, but something new was needed to bring the genre to the forefront of the gamer’s mind as a whole.

Metal: Helsinger, from Swedish developer The Outsiders, is one such game. A combination of rhythm and first-person shooter where you plunge into the depths of hell defeating monsters with a combination of swords and guns, changing your weapons as your play style demands. There have been countless comparisons to Doom being broadcast on the web, and with good reason. There’s a metal-inspired soundtrack, lots of demon slaying action, and frantic gameplay that would at first easily be written off as a clone. However, it has one main difference to being a rhythm game that mostly changes the formula for good.

When you load up the game you are immediately greeted with a beating metronome type crosshair in your GUI. The beat goes along with the metal rock soundtrack playing in the background. Success in this game depends heavily on your ability to strike your enemies to the beat of the music. As you hit each beat successfully, you will be graded Good and Perfect. With each consecutive correct score both your damage done and your Fury score increase. The higher your Fury score (up to X16) the higher your damage output and score increases.

A Perfect Hit, similar to Doom (2016), has the chance to temporarily stun an enemy, allowing you to launch a devastating critical attack that not only kills your opponent, but also boosts your health and makes you last longer. Also drops crystals to keep the fight in time. There are of course health crystals and other power-ups that can be found along the way, always keeping things interesting.

You’ll start the game with your trusty sword, but will encounter a variety of weapons throughout your game, everything from dueling pistols to shotguns. While not the greatest variety, I thought it was certainly enough to keep the gameplay fresh and interesting. The enemy varieties are also quite interesting to help you advance through each level. One part of the gameplay that takes a while to get used to is fighting enemies and staying in tune. When things get frantic (and they will), it’s almost second nature to fall back on the run-and-gun mechanics we’ve all been trained for since the first Doom hit the scene. It’s part of what makes the game unique, but it’s also one of the things you’ll need to train your brain and adjust.

Unlike recent Rogue-like games that seem to flood the market, Metal: Helsinger sticks to level design and a focused gameplay approach. While the game itself is fairly short (about four hours or so), it makes for a more complete experience. Online leaderboards and high scores are the driving factors for completing multiple playthroughs to see if you can top the others who came before you.

For those of you rocking the Steam deck, I have great news for you. While the game was listed as “unknown” from a compatibility standpoint, I had no problem playing it on a Steam deck. I didn’t run into inconsistencies or weird crashes and the overall experience was fantastic. Steam Deck has become one of my new favorite ways to play games, and I’m happy to report that not only did it work great, but it’s also a title that’s perfect for playing in bed. .

Metal: Helsinger is an extremely addictive game, and it’s easy to complete in one or a few gaming sessions. However, it’s also so addictive that once you’re done with it you’re more than happy to jump back into the mix. The music and art style ensure that the game will have a long life, well ahead of its release dates and with the promise of the ability to add your own music tracks coming down the pipe means you’ll be in for some monsters. Will kill and kill. Your favorite Ozzy tunes in no time!

What I liked: Great visuals and awesome soundtrack. Addictive and unique gameplay

Which I liked less: Wish it lasted longer